Moi moi! Later today the 100th puzzle will be posted at Anagrams Around Eve, coinciding with the 100th anniversary of the independence of Finland, from which I’ve recently returned, a bit sleep-deprived and more than a bit sun-deprived, but nonetheless finally ready to post the results of November.

The solutions to all the November puzzles are now revealed, and you can find them using the “See the Solution” links beneath the puzzles at their original posts.

Some thrilling action on the last day of November. That afternoon and evening saw a flurry of correct submissions from a number of solvers, but none more so than MISS SORTED of Delran, NJ, who mounted an impressive eleventh-hour streak to win the eleventh month of the year, cracking every puzzle but one, in the process becoming the first-ever repeat winner at Anagrams Around Eve. Big big kudos to MISS SORTED, who will receive an Anagrams Around Eve notepad and — since she has already secured a set of Triunes — will be the first recipient of a new prize type: a custom word puzzle (e.g., crossword, set of anagrams, puzzle in verse form, etc.) suited to the event/occasion/gift/persons/theme/idea of her choosing.

(Soon I will be launching a custom word puzzle service online. If you happen to already be interested in such a thing for a holiday present, or if you know a couple soon to be married that might want a custom crossword for guests to work on, please contact me directly at AnagramsAroundEve@gmail.com to discuss further. These puzzles can be crosswords, verse puzzles, anagrams, or any number of other word puzzles custom-made to amuse and delight while offering a personally significant touch.)

The five further winners in the notepad giveaway for November are:

Before we get to the part of the round-up that contains spoilers, I thought I might share a verse puzzle that I wrote using the same words that belong to Puzzle No. 75, a five-jugger which a number of you successfully solved but which a number of you may still be contemplating. Here is the puzzle as it appears in the December issue of The Enigma, the monthly publication of the National Puzzlers’ League. 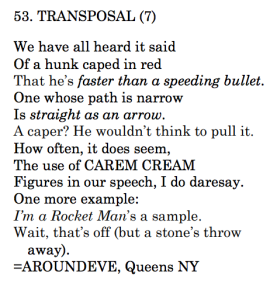 (The solution words—each a seven-letter transposal of the other—belong where the capitalized cuewords CAREM and CREAM are. Often the cuewords in these puzzles are exemplary of the puzzle type.)

Now for some commentary regarding other November puzzles. Spoilers ahead!

darren.whorton with decidedly un-moronic acuity notes that the idea of a MORONIC OMICRON is especially funny, since an omicron is perhaps the least complicated Greek letter to make, being only an “O.” I’d love to see what your idea of a moronically drawn omicron looks like.

[People in charge of a lot?] turned out to be the trickiest ?-type puzzle we’ve ever done, solved by only two. For me, a misdirection clue that can operate as slyly as this one—with entirely natural syntax—is like a gift from the wordplay gods. Interestingly, one of the eventual solvers, MISS SORTED, got the double-meaning bit quickly, surmising that the reference was probably to a parking lot, but then got caught up working with ATTENDANTS, which just so happens to have the same number of letters as the words in the solution, DEALERSHIP LEADERSHIP.

November saw the second puzzle in the (100-puzzle!) history of Anagrams Around Eve to go unsolved by any solver, and I’m guessing it was on account of two factors. Not only was [The more high-end tools?] a tricky Thursday ?-style puzzle, it also employed one of those “chiefly British” dictionary entries with SWANKER WANKERS. I always thought that wanker connoted something more insulting and coarser than apparently it does; in Finland it was explained to me by a fellow writing resident from Wales that the wanker is really a close cousin of the American tool, and this enlightening discussion became the inspiration for the puzzle.

In Finland I also met an artist from Halifax, and so I thought it appropriate to run NOVA SCOTIA AVOCATIONS during our time together.

Finally, for whatever reason, one of my favorite anagrams of the month was COOLEST OCELOTS. It could be that I just find ocelots cool, so it’s an apt anagram. Or it could be that the combination lent itself to nice punning opportunities based on the idea of the “cool cat.” Or it could be that it reminds me of a favorite joke: How do you titillate an ocelot? (If you want me to tell you the punchline and are not averse to slightly dirty humor, send me an email.)

Kiitos for another fun month! Look out for Puzzle No. 100 later today, and have a great weekend.